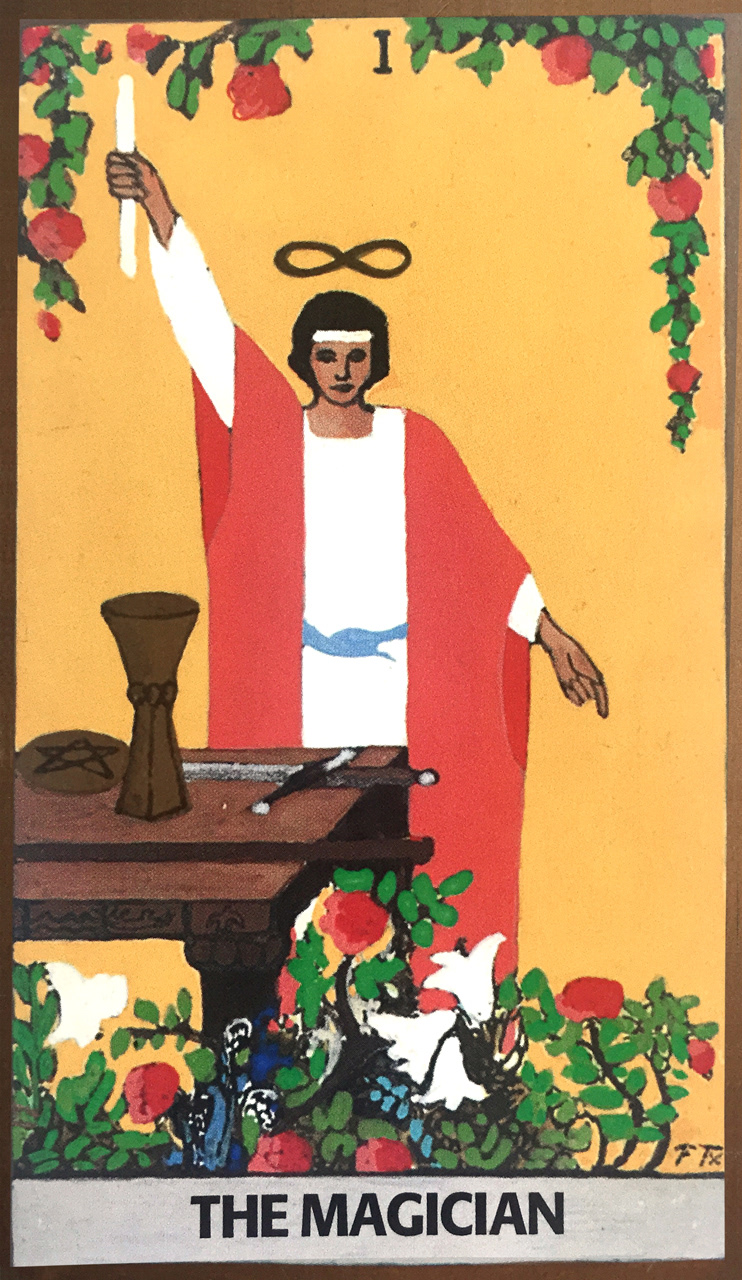 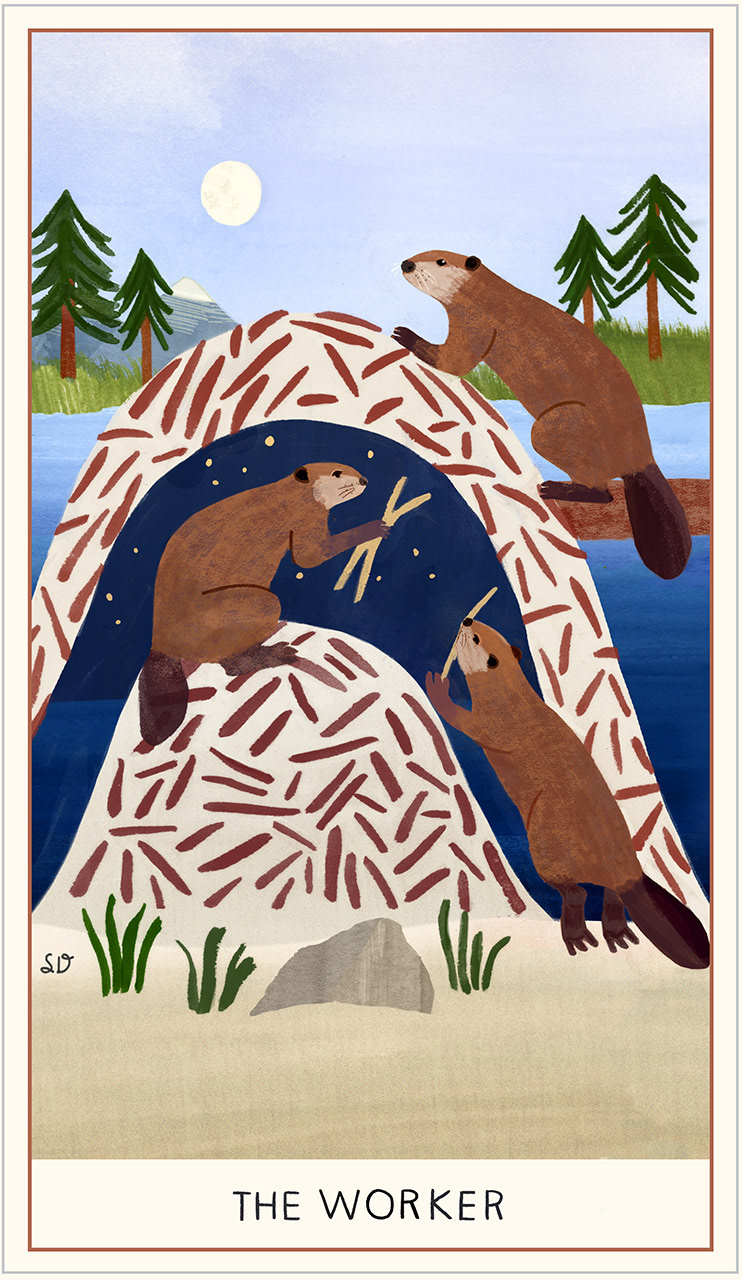 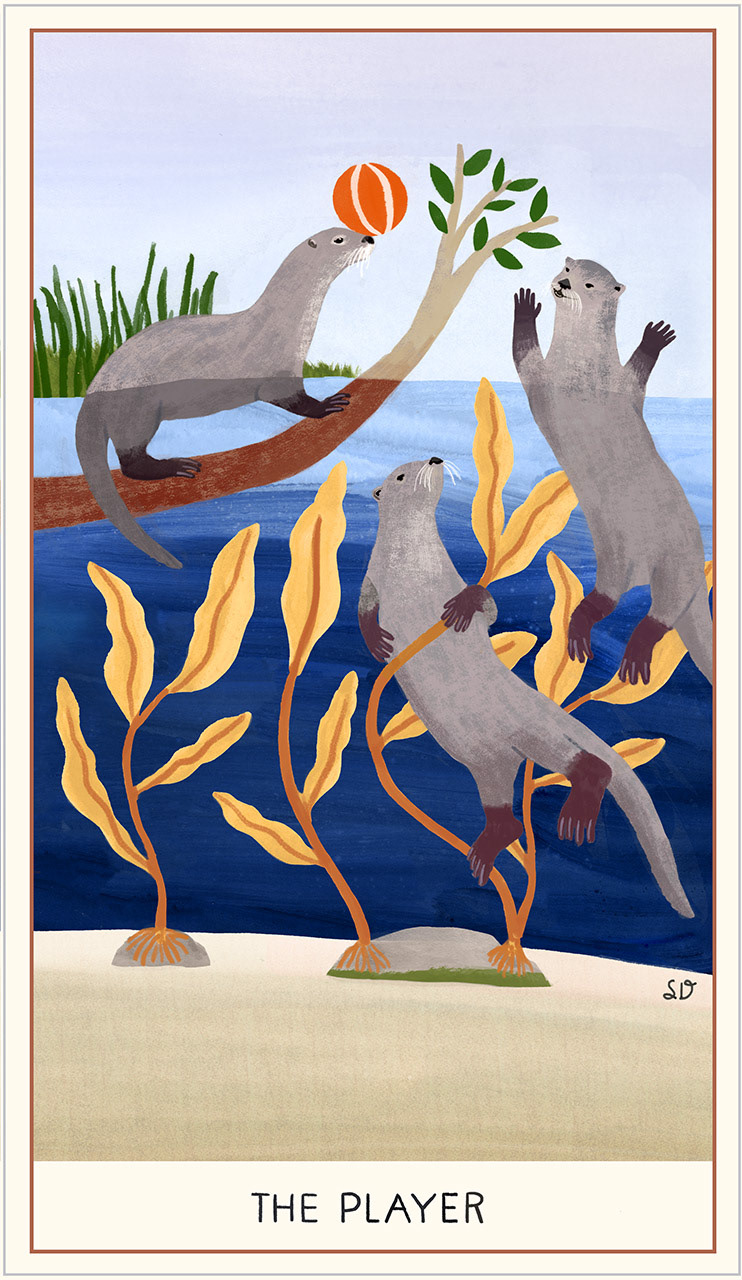 Later decks turned the Bateleur ("the mountebank" or the "sleight of hand artist”, practitioner of stage magic) into a magus (magician) who bridges the gap between heaven and earth.
The Magician as The Worker and Player
Whether you take the sleigh of hand artist of the original Tarot de Marseilles or the Hermes figure of the Rider-Waite deck, the Magician has a handle on the four elements (cups, swords, wands, and coins). The interplay of the elements and of the masculine and feminine is at the heart of what generates life.
The beavers and otters originally lived in the same drawing which I split into two cards for the sake of this oracle project, but in my mind I've always pictured the animals swimming between the two areas in a sort of figure eight movement, very much like the infinity sign above the magician's head. And the creative power of the magician is precisely what I aspired to for my new career illustration at the time, the ability to make a living with something that feels like play.
I wasn't consciously thinking of feminine or masculine in my concept for this drawing but after being done with the sketch the feminine became apparent in the beaver's lodge and the masculine in the branch protruding out of it. Even though this feminine lodge is made of straight "masculine" sticks and the branch and kelp have "feminine" curves.
And now making a comparison with the tarot, I'm thinking that the beavers have very sharp teeth much like the sword, they build a home by transforming the environment much like the gold made into coins was originally transformed in the earth, and the lodge itself is a sort of cup. But the generative power of the wand, or energy, belongs to the otters. They play to learn how to hunt, which requires both patience and alertness in knowing exactly when to act. Beavers are herbivores, not hunters, so their whole focus is not to catch a ball, it's safety. But come winter time, even the otters sometimes find refuge in a beavers lodge.

The dice, symbol of divine fate, has been replaced in the Rider-Waite deck by the magician's arms pointing upward and downward expressing the principle "as above so below," meaning the outer world reflects the unconscious within. This initial insight of the connection between the world without and the one within is what gets the whole journey started. With this discovery comes a sense of a magical power, as represented with the infinity sign over the Magician's head (or his hat) indicating the infinite possibilities of creation with the will.
While beavers aspire to a stable home, life on the otter side is full of surprises. Which would you choose between the two?

The Fool
The Dreamer, Reversed: The Programmer

The High Priestess
The Curator
↑Back to Top