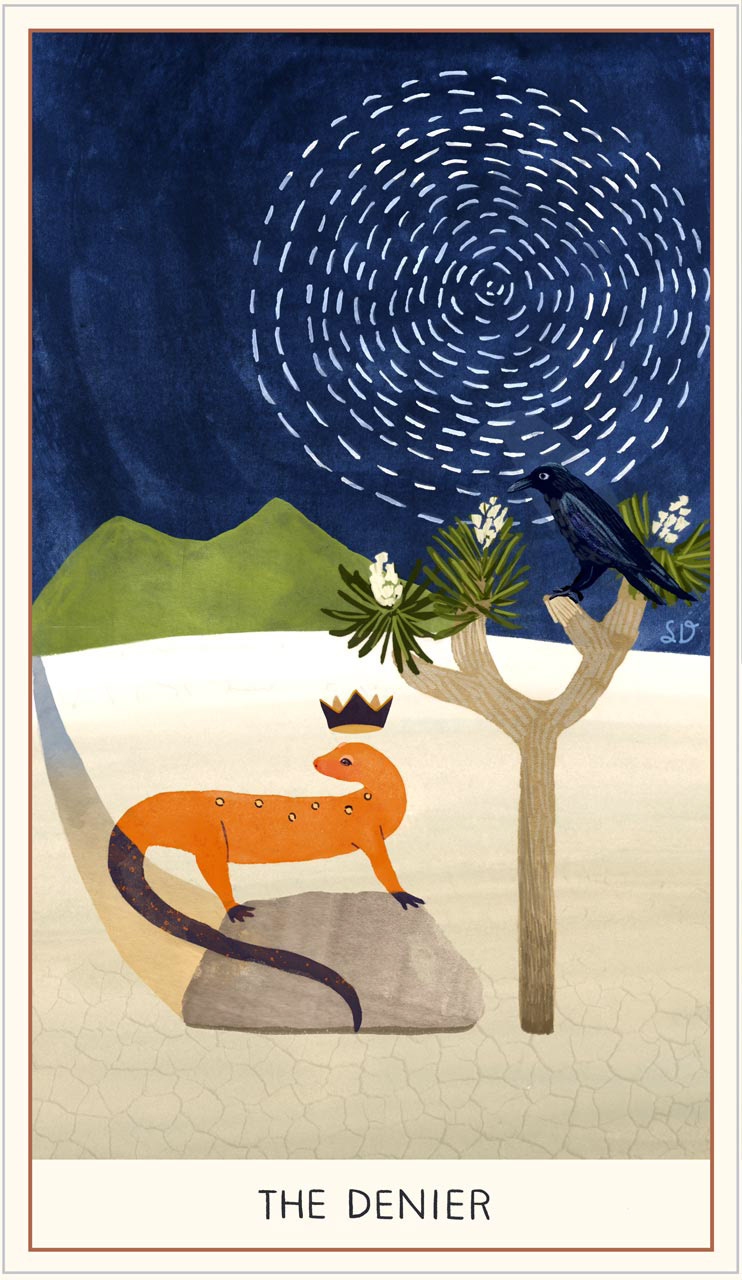 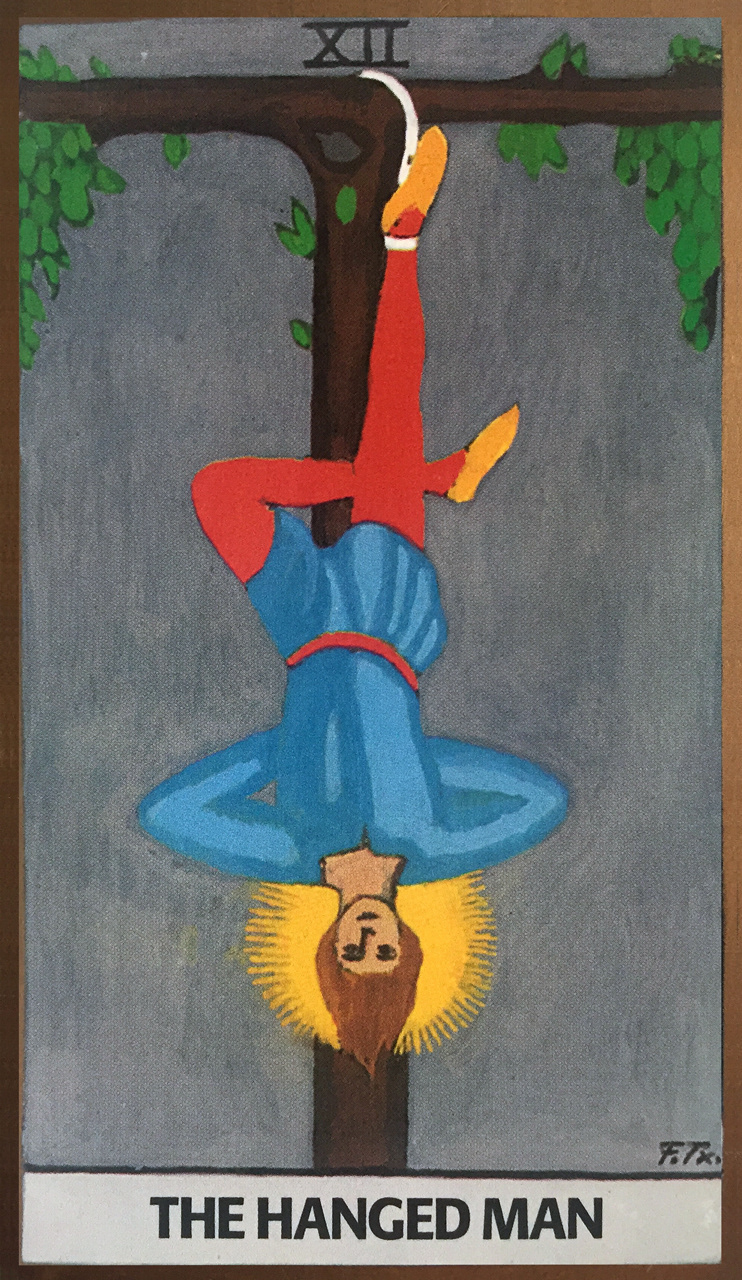 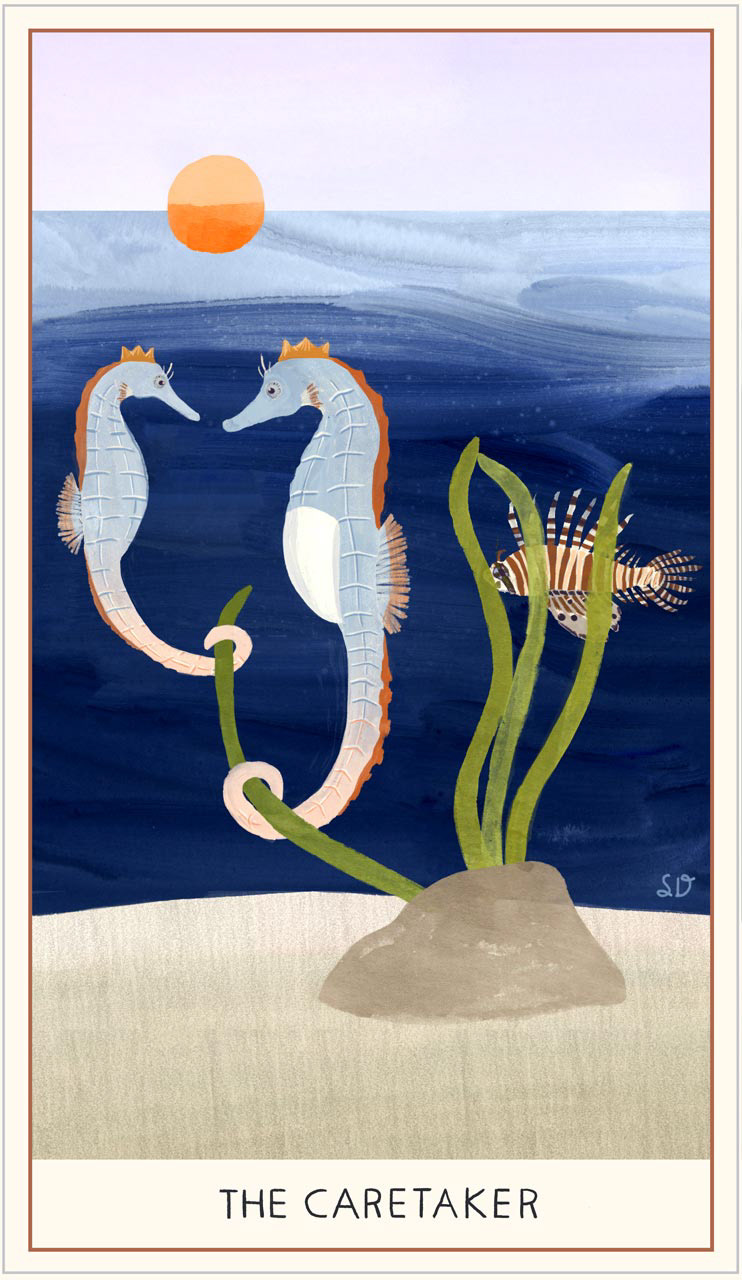 For the Cathar the death of the natural man stands for the beginning of spiritual life, once Perfection has been achieved. The soul must enter the spiritual world with humility, hence this soul’s humiliating predicament.
The Hanged Man as The Denier and Caretaker
The Hanged Man represents the surrender needed to continue the journey into the spiritual world. The man has a calm expression on his face and the tree he is hanging from has leaves, suggesting life rather than death. The halo around the man's head symbolizes higher learning and enlightenment. Psychologically this card might point to the sacrifice and humility required to devote oneself to healing and growth.
In the Denier, the raven connects the material world with that of the spirit, which the salamander denies. The white flowers on the Joshua tree has a meaning of immortality for the spirit as they carry the seeds that generates new trees.
The crown hovering over the salamander, which was the emblem of king Francis 1st who sent Jacques Cartier to Canada, represents a symbolic break from Europe, or psychologically, a split between the mind and the body. This could mean in a positive sense the ability to transcend the body (for example with virtual communication), or on the other hand a possible loss of connection to the subconscious.
The spiral in the sky shows the movement of stars captured by timelapse photography and symbolizes the increasing fragmentation of time in our society (for example chopped up communications with text messages, email, etc). And the track behind the salamander that's half-filled with water symbolizes forgetfulness in connection with the River Lethe of Greek mythology. Since time is a construct of the ego, being disconnected from the unconscious one loses the feeling of immortality and larger destiny that comes from the subconscious.
Likewise, in the Caretaker the seahorses are holding on by a thread for the sake of growth and life, even if they're doing it in an upright position. At the bottom of the ocean, they're feeling the same kind of pressure that's likely accumulating in the Hanged Man's head. This is the pressure leading to wholeness and eternal life (being connected to the transcendent), symbolized by the Hanged Man's halo and the full sun above the seahorses.
The Hanged Man's red pants represent the physical body while his blue shirt refers to the mind, pointing to the union of body and mind, which is also symbolized in the Caretaker by the crowns on the head of the seahorses being part of their body.

The Magician
The Explainer

The Lovers
The Partner
↑Back to Top