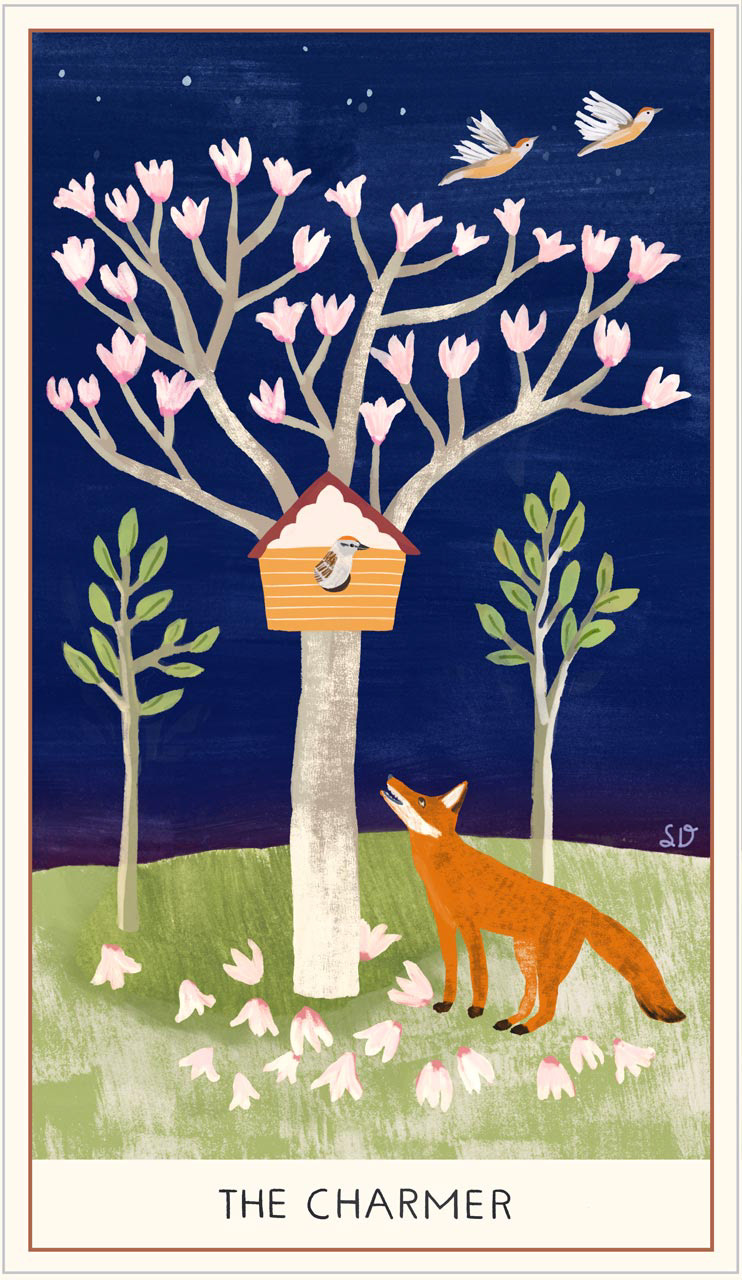 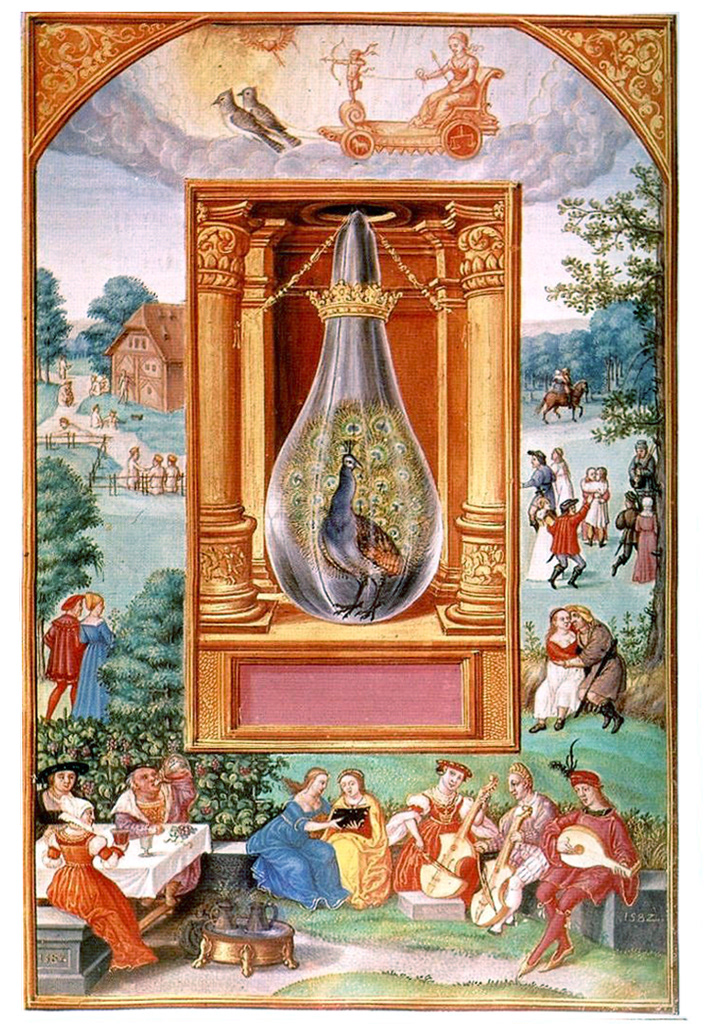 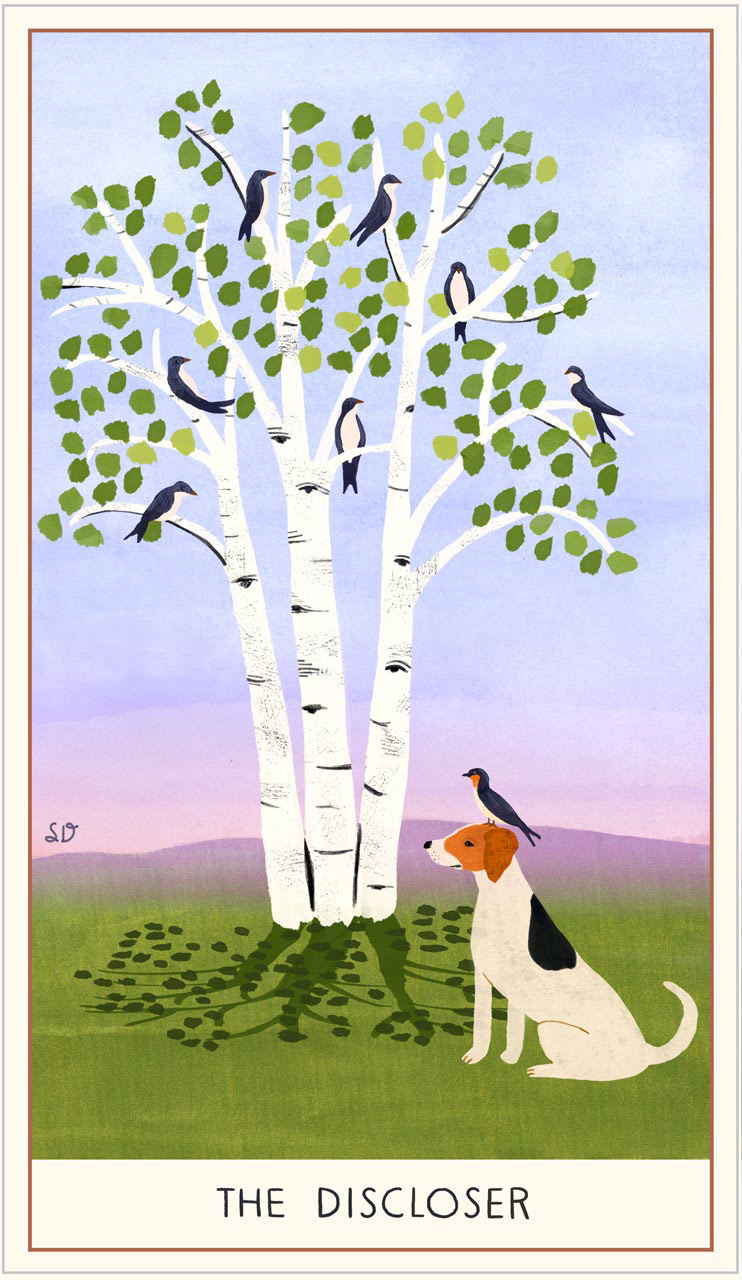 Within a crowned flask, sealed and not heated, a peacock displays its tail. This stage in the alchemical process produces a very beautiful, rapidly changing colours on the walls of the flask.The chariot of Venus (with Eros and a heart transfixed by a golden arrow) is drawn by two doves. The wheels represent Taurus and Libra. Venusian scenes depicted: swimmers, lovers, drinking and eating, playing music, reading, dancing. Below there are three people dining with five musicians playing for them. (Stephen Skinner's Splendor Solis commentary)
The Peacock vs The Charmer and Discloser
“The astrological signs ruled by Venus, shown on the red wheel, are Taurus, the Bull, associated with fecundity, and Libra, the Scales, symbolizing equilibrium. These signs are associated with partnership, reliability, productivity, tactfulness, creativity, and aesthetics satisfactions. Venus and Cupid represent the Greek idea of love. Translated into Jung’s terminology, it is the Eros principle, which is not just love or the sexual attraction but true relatedness, the human capacity for communication of discriminated feelings. This is the essence of relationship, the opposite of narcissistic self-love."
"The iridescence seen in the nigredo at the moment in the process just before it changes to the albedo was likened to a peacock’s tail. This stage represent the beginning of any real process of redemption of the shadow in a psychological sense. When people have fully accepted the shadow side of life, then they know that it enriches their experience of life and they feel ready to affirm a new and healthier attitude toward what was formally only painful and problematic."
"The people in the scene ruled over by Venus are eating, drinking, reading poetry, playing music, making love, dancing, and simply conversing with each other. The symbols surrounding the alembic are not longer in opposition. This is really a turning point, truly the dawn of a new day in the psyche where outer activity and the inner state are in harmony, neither opposing or compensating one another."
"As the obstacles and projections caused by personal complexes and cultural attitudes are diminished, genuine relating becomes possible. The peacock is a state often accompanied by joy and enthusiasm for the possibilities in life and relationship. However it can be an inflating image, because it does not represent the new day itself, only the dawn of the new day.”
The magnolia tree in the Charmer represents beauty, in the sense of "being nice" or diplomacy. Although it may or may not be sincere, as symbolized by the presence of the fox and the falling of magnolia flowers on the ground. The sparrow is hiding behind a protective facade, the protection of the ego. Its insincerity and insecurity along with the fox causes the two sparrows to fly away, emphasizing the feeling of isolation created by the sparrow’s desire for perfection.
In the other drawing of The Discloser the magnolia changed into a birch tree, which symbolizes rebirth, flexibility, and truth. It is the first tree that grows after a fire, and its bark was often used as paper to write. The black knots in the bark also resemble eyes, meaning the bird is now truly seen. Some of the branches point up and some bend down, signifying a relaxed attitude.
The birds, which became swallows, symbolize guidance, strength, hope, and swift thinking. The many swallows in the tree are like the eyes of the peacock’s tail, and represent the many sides of the personality that are now visible. The dog the swallow sits on is a Jack Russell Terrier, a dog that was bred to chase foxes, who is vocal and will not tolerate abuse even if unintentional. The sky also shows the dawn of the new day.
Eros is represented as beauty and seduction on the one end with the magnolia tree and the sly fox, and on the other end as the vulnerability of showing oneself and true relatedness with the dog wearing its heart on its sleeve so to speak. The bird on the dog's head also shows the coming together of the spiritual and the instinctual, similar to the people engaged in physical pleasures in the alchemical plate, while in the other card there is a certain idealization of beauty and anima projection, represented in alchemy by the less physical activities of the people singing and playing music.
Note: the quotes in italic are from the book by J.L. Henderson and D.N. Sherwood, Transformation of the Psyche: The Symbolic Alchemy of the Splendor Solis