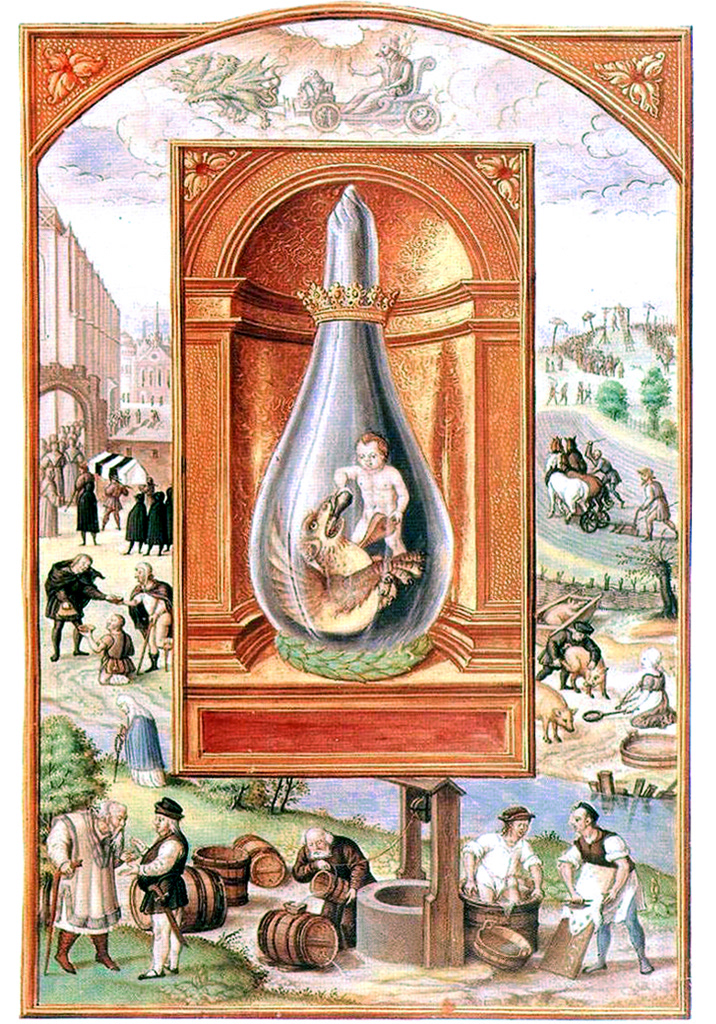 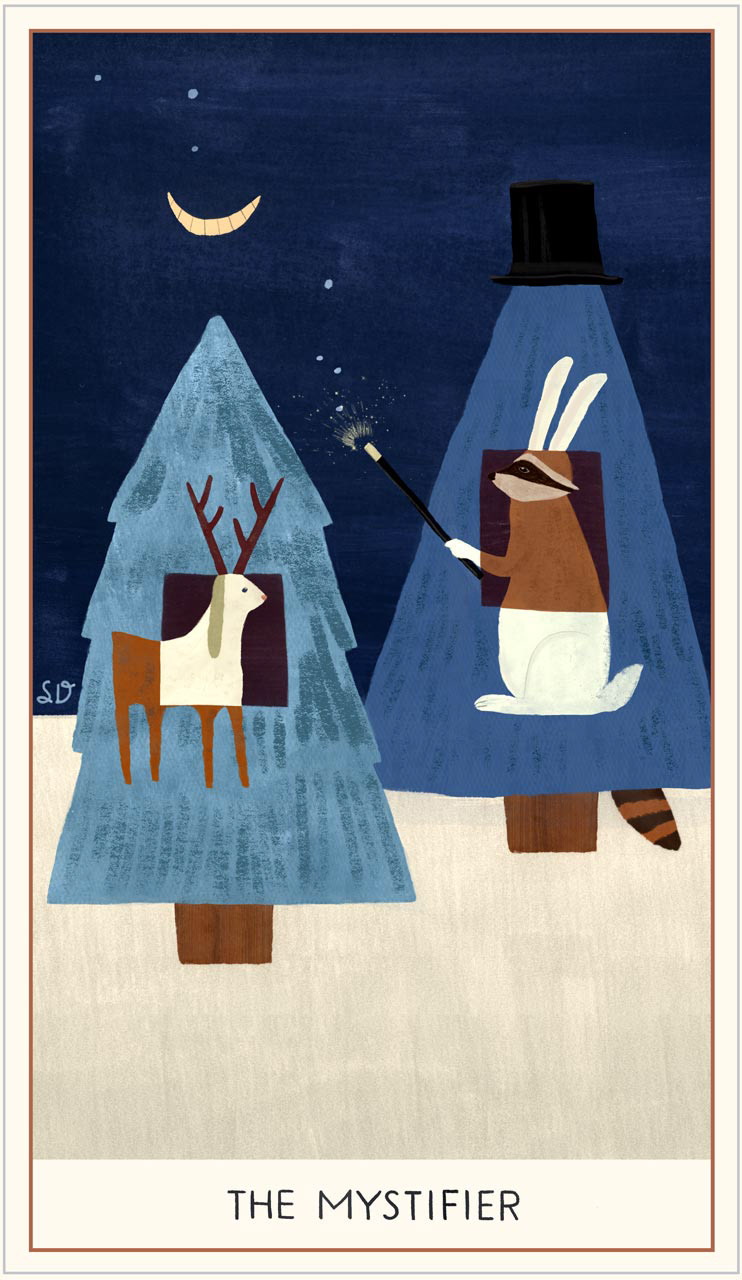 The flask contains a naked child who pours liquid down the throat of, and uses a pair of bellows on, a pale yellow, winged dragon.The flask stands upon wreaths of leaves, but these probably should be tongues of flames. Saturn is associated with lead, but also with antimony.The chariot of Saturn is drawn by two winged griffons/dragons. The wheels represent Capricorn and Aquarius, astrological signs ruled by Saturn, who holds a sickle and caduceus. Saturnian scenes depicted: begging, commerce, drawing water, ploughing, and hanging.  (Stephen Skinner's Splendor Solis commentary)
Feeding The Dragon vs The Mystifier
“Saturn, or Hermes, holds a sickle in his right hand and a caduceus in his left hand. The sickle refers to Hermes’s Saturnine aspect which is associated with Death or Limitation, and in life with resignation and with futile, useless repetition and suffering. Psychologically what is most leaden and fixed is the most valuable source for the work. The caduceus, according to myth, gave Hermes the power to touch others and put them into a dream state.”
The caduceus is akin to a magician’s wand, and in my drawing of The Mystifier it induces the rabbit and raccoon into a dream state. Like Saturn, the god of time, this hidden magician sets the stage of our reality, whether it's a magical one or one where we suffer.
“The symbol in the alembic is a little dragon who appears to be submitting to a naked boy, meaning that the spirit of youth is working on it. He is pouring in the mouth of the dragon the prima material necessary to begin the alchemical opus. The dragon is a young one - threat of madness but also unchanneled vitality, symbolizing a return to the beginning, to a natural not-yet-developed or differentiated instinctual potential. This return corresponds to less differentiated states that are not to be confused with a return to a developmental experience of infancy.”
“The central image in the alembic symbolizes a resurgence of primitive libido - but libido that is contained and endured, not acted out.”
The Mystifier also symbolizes the dreamlike imagination of The Moon in the Tarot (the magic of the Cheshire cat). This can allude to the hidden nature of reality, occult knowledge, which plays a trick on the rabbit and the raccoon. 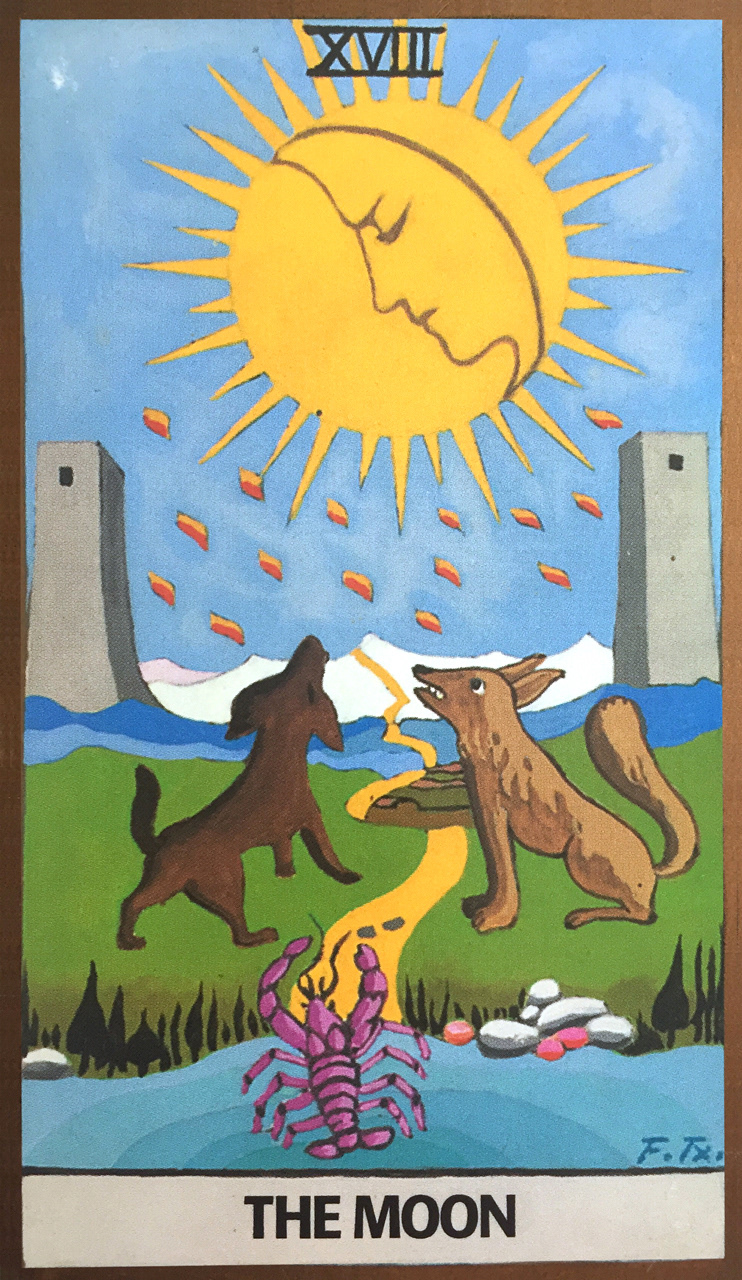 Note: the quotes in italic are from the book by J.L. Henderson and D.N. Sherwood, Transformation of the Psyche: The Symbolic Alchemy of the Splendor Solis

Series 2
Plate 9 - The Hermaphrodite/ The Performer