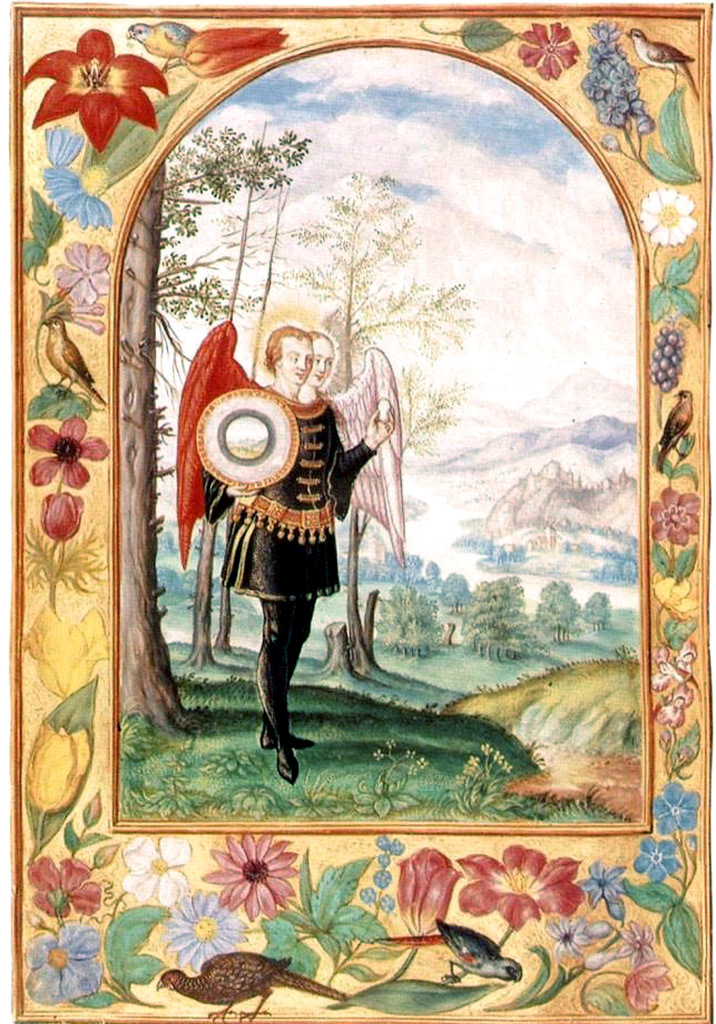 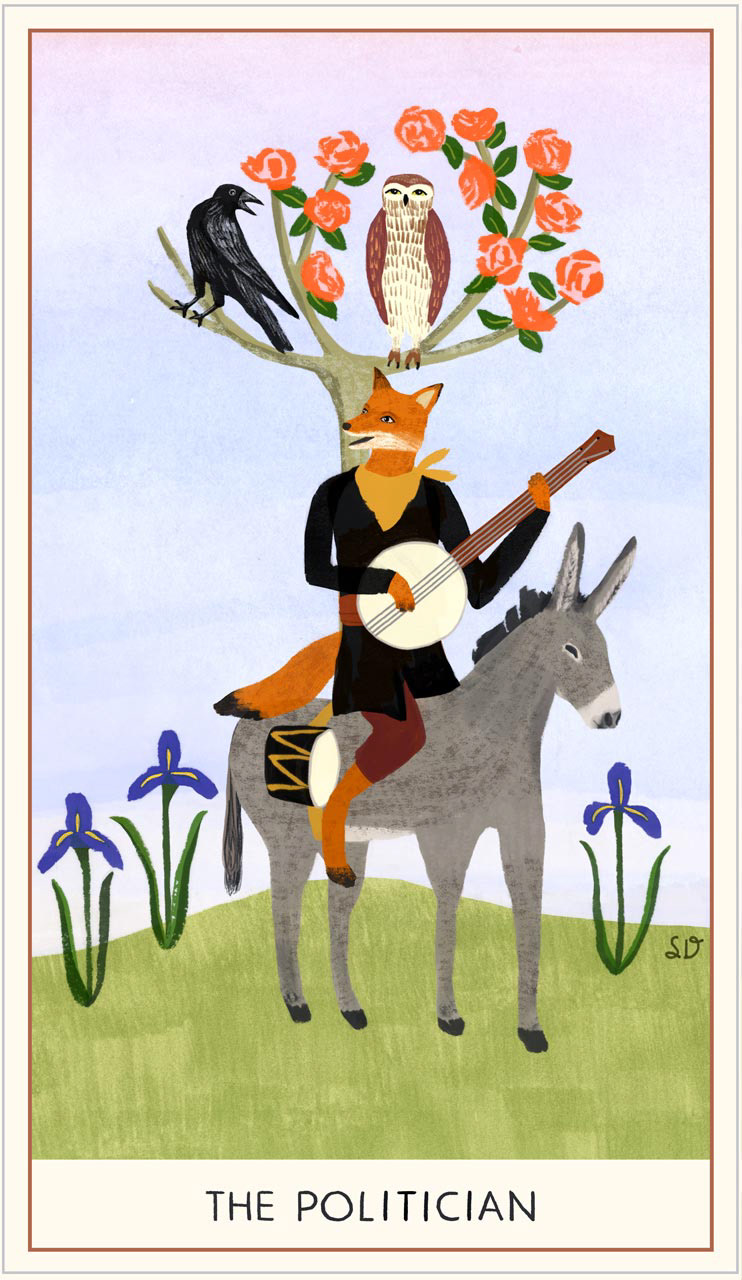 A winged hermaphrodite in a black formal jacket holding an egg in its left hand and a convex mirror in its right. Its right wing is red, its left wing is white (echoing the red and white arms of the previous plate). It has two heads, one male one female, and both have a halo. His black tunic has clasps of red and gold down the front. A river, a town, and the sea are in the background. (Stephen Skinner's Splendor Solis commentary)
The Hermaphrodite vs The Politician
“The resolution of meeting the shadow results in the hermaphrodite which symbolizes the conjunction of the male and female. The black of the shadow is still manifest but in a new light as the impressive clothing. This symbolizes the value of the transformed shadow. In its left hand the hermaphrodite holds an egg, which according to alchemical tradition contains the Four Elements and is a symbol of totality. The center of the yolk is a Fifth Element, the embryo, out of which the chick grows. The symbolism of the mirror held in its right hand suggests a stage of development in which both the inner and the outer can be imagined as coming together, the microcosm reflects the macrocosm.”
In my drawing the hermaphrodite is the fox, who represents adaptability and duality in that he incarnates a union of opposites as the combination of a dog and cat, and is able to mediate opposing messages such as those of the owl and the crow. He is dressed in black, red and gold, the same colors as in the Splendor Solis, and plays a banjo which has 4 strings much like the egg and the Four Elements. The music then plays out as the Fifth Element.
The fence and thistles have been replaced with irises which symbolizes the coming together of the inner and outer world. The goddess Iris was associated with the rainbow and carried messages from the heavens to the earth. In that same line of symbolism, the banjo playing fox also alludes to Orpheus, who descended to the underworld and returned.
The crow and owl are meant to provide a conscience to the fox, the crow being the fatherly conscience and the owl the motherly conscience necessary for mature love Eric Fromm talks about in the Art of Loving (the fox, with his red fur, can also represent the heart or balancing power of love). The donkey represents the body and the integration of the shadow. In this state of balance between the Higher Self, the mind and the body are reunited.
“Although a new synthesis has appeared, we must note that the union is really awkward and artificial. The result therefore is an idealistic model of union, nevertheless it is a provisional attempt to unite what seems irreconcilable. In fact the picture suggests that at this stage a person may feel both ecstatic and humbled by the realization that one s truly a part of nature, something that transcends an individual identity and lifetime. There is finally the feeling that some kind of resolution of the original problem is possible, that there is some possibility of unification. According to this view, the hermaphrodite symbolizes the prospective Self in which opposites may come together.”
“We then might ask whether the hermaphrodite represents a prospect of the Self of whether it represents the conscious ego’s acceptance of the problem of the opposites and the possibility of an attitude that is neither one-sided nor conventional. To Marie-Louise Von Franz the image of the hermaphrodite illustrated the in-between, or stuck nature of a complex. This is the negative, regressive aspect of the hermaphrodite, which were represented in medieval alchemy as associated with the devil rather than the divine.” 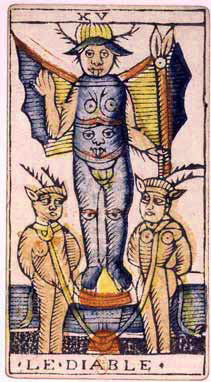 In the Red Book Jung describes his meeting with the Red One, which he calls at some point the devil, but also recognizes his sense of humor which balances Jung’s own serious attitude. That seems very much fitting for my fox, who is a bit of a joker (like Reynard the Fox) and with his red fur actually is a “red one”.
“It is tempting at this juncture to think this is the end of the process, nevertheless this is not the end. Should it end there the patient will likely be left with an inflated sense of the power of insight. The patient may then continue to act out the unsolved problem because he is unable to really live the life that had been intimated by the insight. The statement of wholeness can only be made by life itself and must wait for events in real life to realize its meaning.”
Note: the quotes in italic are from the book by J.L. Henderson and D.N. Sherwood, Transformation of the Psyche: The Symbolic Alchemy of the Splendor Solis

Series 3
Plate 16 - The Peacock/ The Charmer and Discloser