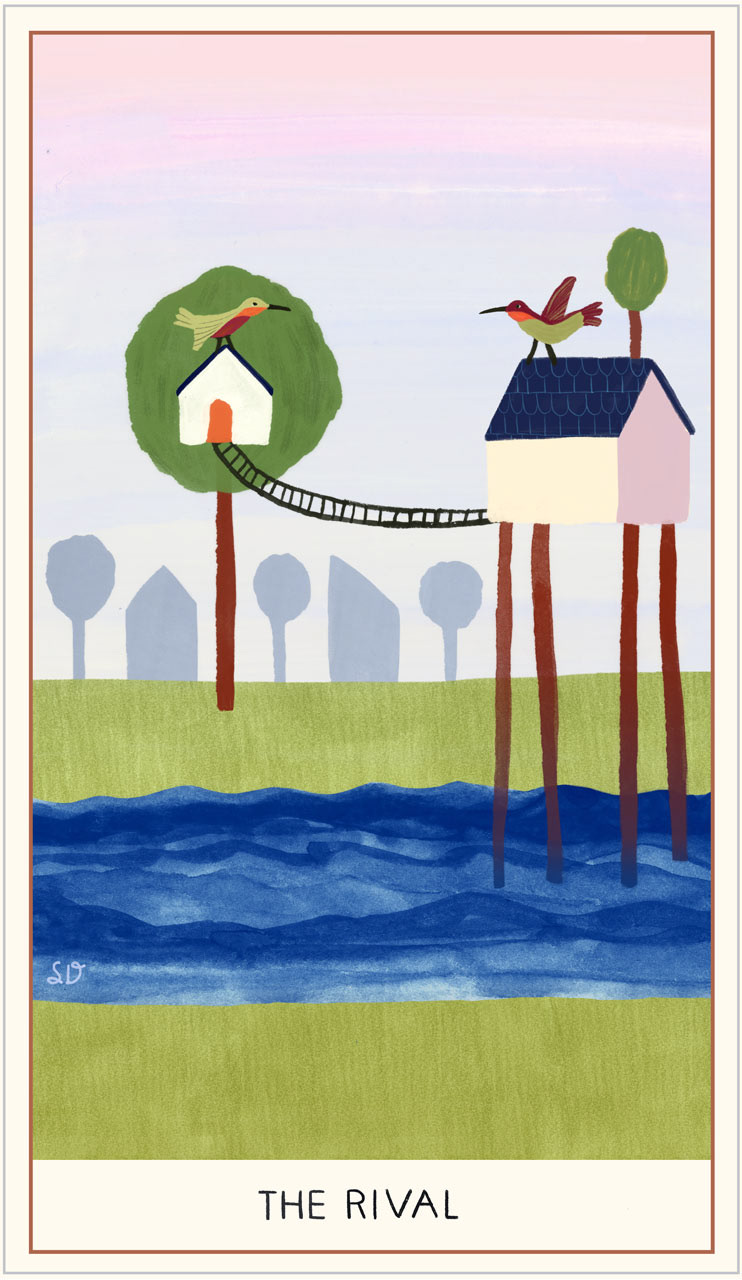 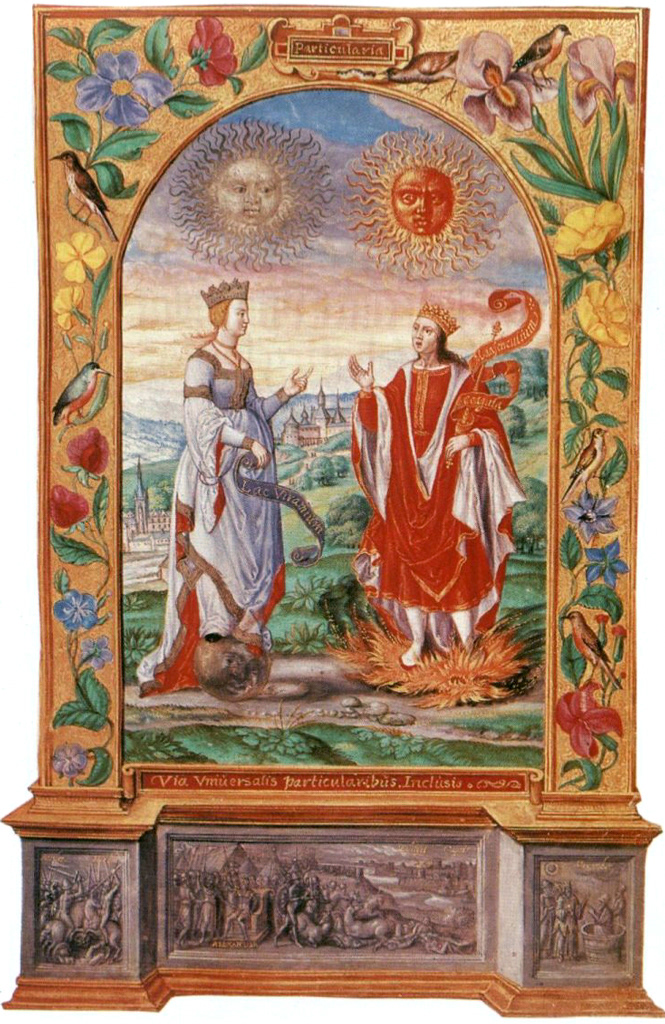 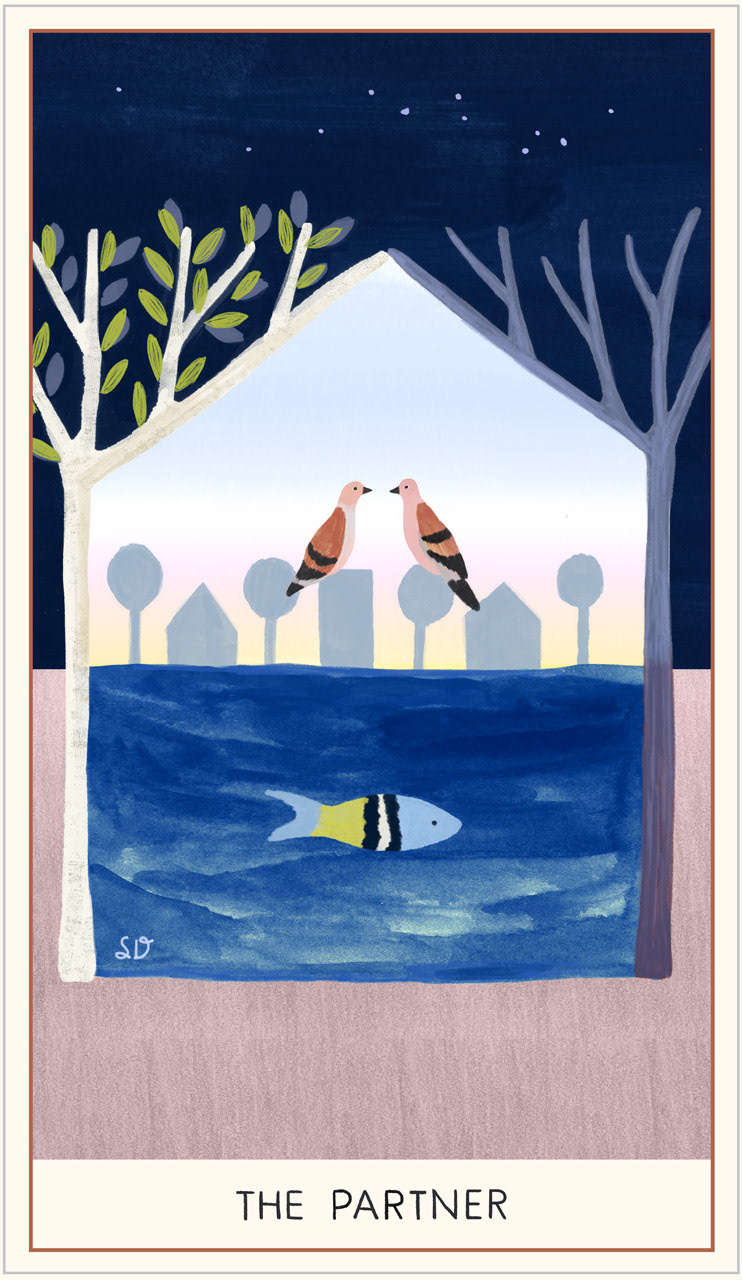 The Queen (with a scroll inscribed "Virgin's Milk") in white stands on a living ball of this liquid, with the Moon above her. She talks to the King who also has a scroll ("Masculine Coagulation"), holds a sceptre and wears read and ermine robes. He stands under a Sun, with his feet at a fire. On the frame are plants and birds. The top scroll reads "the particular is derived from (and included in) the universal way." (Stephen Skinner's Splendor Solis commentary)
The Royal Couple vs The Rival and The Partner
"The King as representative of Western culture’s ruling principles consciously faces the Queen, who represents the cultural feminine. From her calm attitude and newly elevated position we anticipate a shift in consciousness."
“The two scrolls - coagulate the masculine and virgin’s milk taken together suggest a process that was central to alchemy, dissolve and coagulate. The alchemists repeated it many times in order to purify the coagulate. This process is much like the repetition that occur in analysis, where an unconscious attitude or complex manifests itself in behavior and symbolic material such as dreams. If the treatment is successful the problem will be resolved, opening the way for new developments. The  coagulate and dissolve is like the work in analysis where inflexible or hardened attitudes are softened and malleable or underdeveloped aspects of the personality are strengthened and differentiated. The Queen here is in full command of herself, the essence of a developed feminine consciousness with her own source of light, as represented by the radiant silvery moon above her head.”
The two hummingbirds in the Rival represent the Masculine and Feminine, sometimes competing sometimes cooperating. The 3rd symbol in the Lover acts as a transcendent function, bringing the two together in the symbol of the fish. Not any kind of fish, it’s a bluehead wrasse, which have the particularity of being able to change sex when the male of the colony dies. So it is androgynous and points to a union of opposites. And the two trees which form the house shape do too. Similar to the Moon and Sun, one has leaves so its moisture points to dissolution, and the other tree has naked branches so its dryness points to coagulation.
The trees are joined below through the water of the subconscious and above by their branches touching and together form a home or vessel for transformation. The water as a liquid symbol of the unconscious also points to dissolution, while the city represent the conscious side of the psyche and coagulation.
The sunlight inside the home represent the renewable passion between the two doves, which results from a differentiated union of opposites.
Note: the quote is from the book by J.L. Henderson and D.N. Sherwood, Transformation of the Psyche: The Symbolic Alchemy of the Splendor Solis